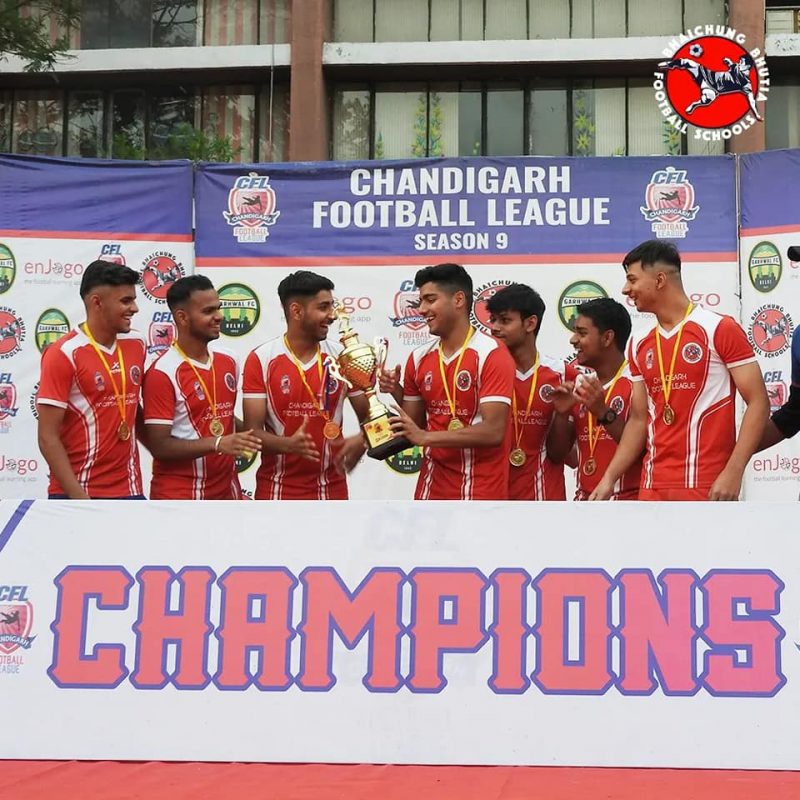 It was 2012. The team at enJogo-Bhaichung Bhutia Football Schools (BBFS) was expanding operations after starting centers in Delhi. Chandigarh was the next stop to open the non-residential academies. Chandigarh has produced sporting greats for India. But the tri-city lacked a football culture.

“When I was conceptualizing the Chandigarh Football League, I envisioned creating a brand rather than just an event. The motive was to have a long-term impact and nurture young talent,” quipped Ankit Arora, Chief Operating Officer of enJogo-BBFS.

The idea of the Chandigarh Football League (CFL) acted as a launchpad to start football centers in the region. However back then, nobody foresaw the event becoming a flagship property and such a big sporting carnival.

Within three months of the first edition, enJogo-BBFS started a center in Shivalik Public School, Mohali. The first batch had most students from Chandigarh Football League (CFL). As of today, enJogo-BBFS operate five centers across the tri-city.

“I’m thankful to Mr. Bedi, the Director of Shivalik Public School. When we were about to start our operations in Chandigarh, I pitched him the idea of CFL and told him about my journey of leaving the engineering field and joining a football startup. He not only accepted our proposal but helped us along the way. Things took off from there,” continued Ankit.

Chandigarh never had enough football competitions. Children were deprived of opportunities and had limited interaction with the game. The CFL started to solve this problem.

“Each player gets to play at least nine games. It is a mandate for all participants to get playing time. They learn and grow through the tournament. The coaches make it a point to work on their physical, mental, social, technical, and tactical abilities,” said Jaskaran Singh Bhullar, Center Head of enJogo-BBFS, Chandigarh.

When the league started, the initial challenges were aplenty. Most players never played a football league. The organizing team started to raise awareness amongst coaches and parents first. Then came the children. But as seasons went by, the demand saw a surge.

“Over the years, we noticed that the schools which did not encourage football have created their teams. Thanks to the Chandigarh Football League. The demand has increased significantly, and now we see parents, kids, and coaches eager to participate every year. It has become a festival, and everyone waits for the event to start,” continued Jaskaran.

Over the last nine editions, the CFL has engaged 3000+ players. The age groups range from U-7 to U-18 and are divided into six groups. The selection of teams happens following the below-mentioned process:

A platform where talent meets opportunities

In the latest edition, two boys – Manan Arora and Parth Katoch, traveled from Shimla to participate in the competition. This is the first time in the league’s history that outstation players registered.

“This is my first year. After school, we travel 4-5 hours before every matchday. I got to know about the tournament through the BBFS Instagram handle. In Shimla, we do not have enough playing opportunities. Thus, my friend Parth and I decided to play in the league. The experience has been great, and I look forward to more such tournaments,” quipped Manan, an 18-year-old student-athlete.

CFL also acts as a medium to scout the best talent from Chandigarh. The players who perform well receive scholarships to join enJogo-BBFS Developmental Squads and Residential Academy.

“I never thought playing an amateur league like the CFL could open such doors for me. I was scouted at the tournament and got an opportunity to represent enJogo-BBFS Developmental Squad in 2014. I continued with the team for five years and played reputed tournaments and I-League U-13. The experience has been great on and off the field. Thanks to my coach Aditya Sharma for believing in me,” said Sahil Negi, a former enJogo-BBFS scholar, and state-level player.

This year, the league started from the 2nd of June and continued till the 25th of June.

#43 The significance of set pieces in football