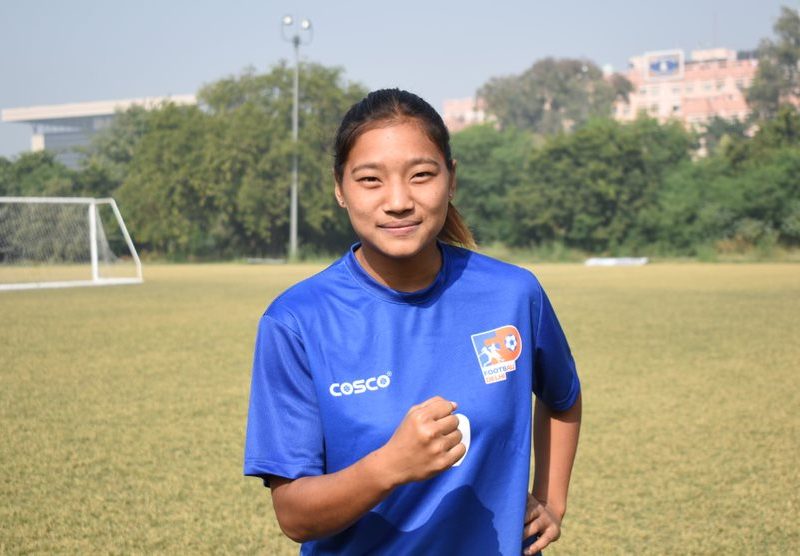 The newest Thapa on the block

It was just a few weeks back, when the Indian Women’s team made headlines in the sports section of multiple news publications. For the first time in the country’s football history, India played Brazil in a friendly game at their backyard.

To everyone’s surprise, India equalized at the eighth minute. 20-year-old Manisha Kalyan blistered through the left flank beating defenders and placed the ball at the bottom right corner of the net. History was made and the entire Indian football fraternity celebrated in unison. The match ended in Brazil’s favour, but the performance will be remembered for ages due to the sheer resilience displayed by the young lionesses.

Women’s football in India has been the buzzword for the past several seasons. With the likes of Bembem Devi (Padma Shri awardee), Bala Devi (Player for Rangers FC), making a name for themselves at the national and international stage, the future seems bright for players reaching the pinnacle.

However, the entire women’s football ecosystem in India remains highly fragmented and lacks governance. If we look at the bottom of the pyramid, there’s no defined pathway for footballers to reach the top. Women footballers from most regions lack access, infrastructure, and guidance primarily to pursue football at the national stage. Then comes the societal, and cultural challenges as well.

But as the saying goes, if there’s will, there’s always a way!

Moulded in hills; shaped in the capital

Such was the case for 18-year-old Anjana Thapa as well.

Anjana, born and bred in the mystic hills of Dehradun, kicked a football first as a 13-year-old. Unlike most girls of her age, Anjana was always intrigued to pursue football – thanks to her school, which has always had a vibrant sporting culture and produced notable sportspeople. Gorkha Memorial School in Dehradun was home to former Indian international footballers Shyam Thapa and Amar Bahadur Gurung, Olympians like Padam Bahadur Mall (who won the first-ever Asian Games boxing gold for India).

Seeing boys play and train at the school facility, Anjana joined them and started playing as a forward. As days passed by, her curiosity went up and the willingness to learn football strengthened.

Initially, Anjana’s talent came to the fore at local tournaments in the city. Her abilities with the ball and adept thinking caught the attention of many. In a state-level trial in 2016, she received her first opportunity to play an open-national tournament for her school in Andaman & Nicobar Islands.

“I have always been passionate about playing football since the time I can remember. I don’t know how, but I have always felt that I had a deep connection with the game. But I never had the opportunities to pursue at the higher level” said Anjana.

After her initial exposure, the subsequent opportunity came after two long years. One fine day, she was spotted by Rahul Negi, an AFC ‘C’ licensed coach associated with Bhaichung Bhutia Football Schools (BBFS).

“It was a local tournament when I first saw Anjana. The moment I noticed her playing abilities, I sensed her potential. Alongside the BBFS centers, where I mostly train boys, I voluntarily run a coaching center for girls in Army School at Garhi Cantt, Dehradun. I asked Anjana to join us” informed Rahul.

Anjana’s football development took off once she started training under Rahul. Each day, Anjana would travel long hours to reach the field, train, and then get back to her daily chores. Life revolved around sharpening her skills in football alongside continuing her education and other duties.

“Keeping aside her abilities in football, Anjana is very dedicated and punctual. She lives quite far from the coaching center but her zeal to learn and better herself makes her wake up in the morning for six days every week to attend sessions. Anjana is also aggressive. Often, she is screaming at her peers for not passing the ball. But nobody has ever had the courage to say something against her (laughs). The thing is, Anjana is a leader. Anyone who knows her is aware of her abilities and the passion she brings on to the game. That’s what separates her from the rest.” said Coach Rahul, with a cheerful smile.

Once the pandemic subsided, Rahul spoke with senior instructors at Bhaichung Bhutia Football Schools and sent Anjana to Delhi in March 2021. For the first time, Anjana traveled alone with the sole motive to prove her mettle at the bigger stage.

At Delhi, she spent months training with Garhwal Heroes FC and played in the Women’s league. She fared exceptionally in the tournament and was spotted by scouts from various regions. Soon, Anjana received a call up from the Delhi state team as well. She joined and represented Delhi at the Senior Women’s National Championship in Kerala in December. At the National Championships, Anjana scored twice against Karnataka.

“Leaving home was not easy. For the first time I was staying alone, and I had to do a lot of things on my own. Life revolved around practicing in the mornings and putting my efforts into improving myself. I’m happy that I could prove myself and score goals for the teams I represented” said Anjana, with a broad grin.

Anjana is currently pursuing BA Honours from a reputed college. With the support she has by her side, her aim is to represent India. The exposure in Delhi has changed her completely and there’s no looking back from here.

“One thing that Rahul sir has always taught me is to dream big. My aspirations have always been to reach the pinnacle in whatever I do. The support that I get here has motivated me to push my limits and my next aim is don the national colours.” concluded she.

Just like Anjana, there are multiple talented athletes who do not get the opportunity to showcase their skills at a recognized level. Coaches like Rahul play a significant role in India’s football development and we all must laud these coaches for their contributions in Indian sports.

“I believe Anjana has a very bright future ahead of her. There are so many talents in Dehradun who deserve an opportunity but lack the pathway. I am sure, as the game grows in the country, opportunities will grow. I am here to support all of them by every means” stated Rahul.

Women’s football in India is set to grow at a steady pace. With multiple academies mushrooming, new teams being formed, the opportunities are on the rise. It is also because of the consolidated efforts by the All India Football Federation (AIFF), which has emphasized on improving competitive exposure, hosting global tournaments, and increasing participation at youth levels.

India is set to host the AFC Women’s Asian Cup in January 2022 where the Indian team will face 12 best teams from Asia. India will also host the FIFA U-17 Women’s World Cup in October 2022. The global age-group showpiece will host 16 nations from 6 confederations.

#19 From Grassroots to Pro: The journey of an Indian football coach