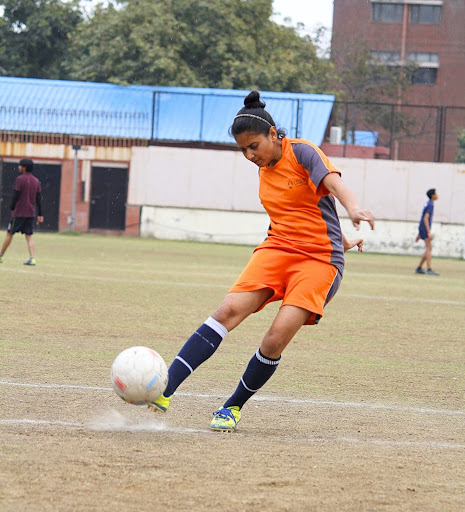 I am a stubborn woman

“You got a dream, you gotta protect it. People can’t do somethin’ themselves, they wanna tell you, you can’t do it. If you want somethin’, go get it. Period”

– The Pursuit of Happyness.

Meet Sangeeta Das. A 29-year-old player-cum-coach, whose life revolves around football. Unlike others, her introduction to football happened very late. Sangeeta first played at the age of 21.

“I started playing football in 2013. Back then, I was pursuing my graduation in Hindi Honours from Deshbandhu College, Delhi University. My mother, a homemaker, was involved in an NGO named CEQUIN in New Delhi. Alongside education for the underprivileged, the NGO used football as a medium to impart life skills. She told me about the program, and my journey took off from there,” said she.

At CEQUIN, alongside playing, she coached young footballers as well. Ever since Sangeeta started, she stayed resolute to make a career in football as a player and then as a coach. However, her family thinks otherwise. As a late bloomer, she always needed to prove her mettle.

“My family won’t support me playing and coaching simultaneously. They tell me there’s nothing left in football. That I need to take up a job now and get settled. Since I turned 25, my parents have pushed me to get married as well” informs Sangeeta.

Adding to it, most of her batchmates from the NGO have left football and moved on to pursue other things.

“When I started playing at the NGO, we had more than a hundred female footballers enrolled there. However, with time, the number decreased drastically. Most of them got married or opted for other jobs. Very few of us remained and continued our journey,” said she.

“I was always motivated to pursue an unconventional career. The thought of pursuing sports as a career intrigued me. Since childhood, I lacked the confidence to speak and express myself. But over the years, football has made me a better person. The game instilled team-building traits in me. It has developed my confidence, empathy, and made me courageous. I traveled outside Delhi because of football, which I could have possibly never imagined if I was doing something else,” tells Sangeeta.

In 2016, CEQUIN helped Sangeeta complete her D-License and start her formal career in coaching. She then joined Bhaichung Bhutia Football Schools as a part-time coach. Over these years, Sangeeta’s learnings from football helped her understand the game better. At BBFS, she picked up the technical aspects of coaching. Now, she is adept at planning a day’s session.

“I have learned so much from the Coach Development workshops that BBFS conducts. I don’t think any other academy has been doing the same. BBFS has provided me with the platform to enhance my learnings. However, I stopped coaching at times due to personal reasons. But BBFS gave me the opportunity whenever I wanted to resume” tells she.

The Pursuit of Happiness

Sangeeta continued enhancing her knowledge and enrolled for a distance course in Bachelor’s of Physical Education from Wainganga College of Physical Education, Nagpur in 2018. By the start of 2020, she had completed the degree. After completion, Sangeeta was about to take up a coaching job at a school. However, COVID delayed the plans.

Another year went by. Sangeeta had to wait. Patiently. But the tenacity to take on adversities always made her believe that her sacrifices shall bear fruits.

“Ever since COVID happened, my family has pushed me to take up a job in teaching or get married. But if I do so, the effort over all these years and my degree in B. P. Ed would be wasted. I try my best to make everyone understand that I will get a job in this field. But at times, it gets difficult to convince”

With utmost grit and overcoming the unforeseen circumstances, Sangeeta restarted her career in football as the pandemic subdued.

Becoming a Physical Education teacher at reputed schools requires players to have exposure in national-level competitions. Sangeeta joined Growing Star FC to play at the highest level and gain a full-time job in a well-known institution.

“Marriage and starting a family can wait. So can conventional jobs. I’m a stubborn woman. I won’t stop chasing my dreams. My complete focus is to make a career in coaching football. Parallelly, I wish to continue playing as well. I took up the course in Physical Education investing all my savings over these years. And I will ensure that the money isn’t wasted. I will land a job in this field soon. That’s why I’m continuing with BBFS as well. I’m sure, going forward they will also present platforms where I can establish myself” concludes Sangeeta, with a broad grin.

That’s her. A dreamer, believer, and an achiever. No matter what comes her way, her cheerful demeanour shall keep every obstacle at bay.

#13: The life of an Indian pro footballer

#12: In the lap of nature, and the footsteps of legends

#11: Slogging it out with Shlok