Last week, the newcomers at one of our academies were asked to state their preferred position on the field. Without much adieu, the response came ‘STRIKER’ from most.

David De Gea, the famous wall of Manchester United, started his playing career as a striker before he found his calling under the woodwork.

Andrea Pirlo, the Italian midfield-maestro, initially began as a classic No. 10 before he remodeled himself as a midfielder. Similarly, there are several examples where the best names in world football started as strikers before switching to different positions.

In football, the most allured spot is that of a striker because of its evolutionary reasons.

The evolution of a striker

The role of a striker has evolved over the decades. During the 19th century, a typical formation in a football match would be 1-1-8. One defender. One midfielder. Eight strikers. Unlike today, football was chaotic.

The sport of Rugby inspired these absurd formations, and until 1925, the laws of the game were quite different than what it is today.

At the start of the 20th century, Herbert Chapman, an Englishman, revolutionized football formations.

Herbert, the father of modern-day football, introduced the 3-2-2-3 formation in the 1920s, where his ideology was to field a team balanced on all areas and focus on passing from defense to strikers. The formation, which typically looked like an ‘M-W’ evolved the way football is practiced.

Herbert’s innovation made his teams quick, organized, and disruptive. He won four league titles and two FA Cups with Huddersfield Town and Arsenal alongside a Southern League title with Northampton Town in his short managerial tenure.

Over the years, formations have further developed. Recently, the 4-4-2 is the most common, where a team consists of two strikers. And their roles are predefined.

The guile of a poacher

“In a fast-paced game like football, a striker is always on the run. At every moment, a striker, while moving, needs to be aware of the surroundings. The best strikers are the ones who are able thinkers, quick on their feet, and possess superior abilities with the ball,” informed Anup Singh, Technical Lead at Bhaichung Bhutia Football Schools.

The position of striker demands certain qualities. It is not about being the best player in the team but being the most adept. In general, there are four basic qualities of a striker which can be remembered as the ‘TIPS’ acronym:

A striker’s primary qualities are finishing, ball control, passing, and dribbling. As coach Anup mentions, strikers can be segregated into three profiles:

“Let’s start with a holding striker. These strikers have the physical strength and are efficient to win balls, clutch, and distribute them. They often outmuscle the defenders resulting in better opportunities to score. The best example of a holding striker is Romelu Lukaku.

Next comes the fox-in-the-box. These strikers are always on the move and are aware of their surroundings. They will confuse the defenders with swift runs and find the ideal positions to create space and score. Take Luis Suarez as an example.

The third type is called the False 9. A striker who often falls back to help his team in midfield, and if required, in defense. Alongside scoring, these players help in building the game. The best example of a False 9 is Lionel Messi” quotes coach Anup.

In 2002, the Brazilian World Cup squad comprised one of the greatest and the most competent strikers of all time, Ronaldo Luís Nazário de Lima. Ronaldo’s quick thinking coupled with his prolific technique was a treat to watch.

Ronaldo was not the fittest. He endured a lethal leg injury before the competition. However, what separated him from the rest was his ability to read the game alongside his superior athletic gifts. He became the highest scorer in that edition and achieved the ‘Golden Boot’ award alongside lifting the fifth World Cup for his country.

The best strikers are creative and great thinkers of the game. If a 90-minute match is closely monitored, a striker has the ball at his feet for 4-5 minutes. The intelligence is defined by the work that happens during the remaining 85+ minutes.

Opportunities are few in the game. A striker at most can receive five chances during a game to score. The ability to make accurate choices at a split-second defines the ability of a striker. Often, strikers score stunners and yet some miss sitters. Is it just luck or the right choice?

There are different styles for shooting a football: The toe-poke, chip shot, bending shot, outside shot, are a few to name. The precision in decision-making and the confidence in execution differ a talented striker from an average one.

Usain Bolt, the fastest man on earth, was keen to play professional football in 2017 as an attacker. After winning eight gold medals at the Olympics in 100 and 200-meter races, Usain started his new football training in Germany with Borussia Dortmund and later represented teams in Norway and Australia. Unfortunately, his tenure in football was short-lived. 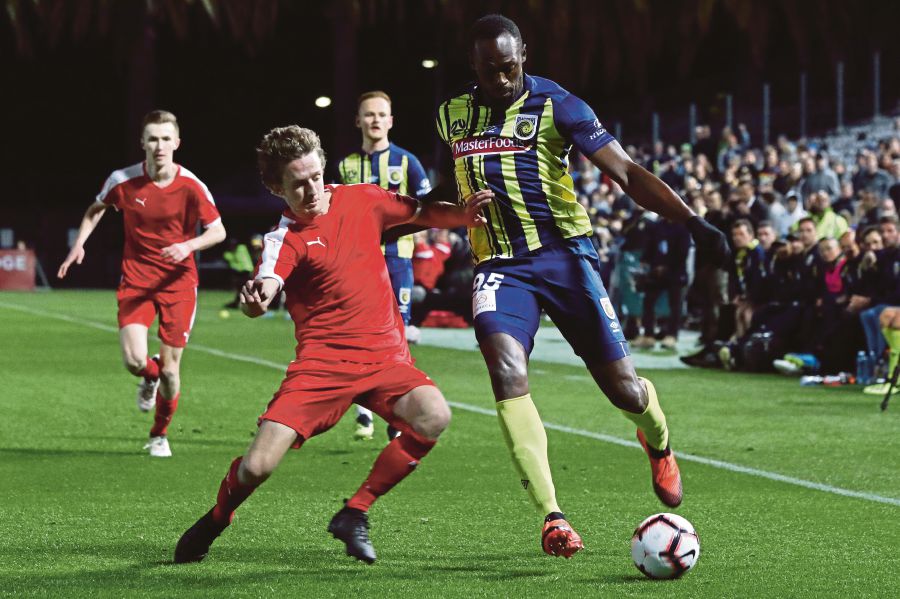 Speed is essential for any striker. However, it is not about the ability to run fast. Usain’s athletic prowess in sprinting was superior to most of the teammates he rubbed shoulders with at a football field. But he could not match his counterparts. Was it because he started late and didn’t have the conditioning required in football? Of course. However, there are more reasons for it.

Alongside the technical abilities, the demands of speed in football are quite different. The potential to think and run fast, accompanied by quick feet, explosive sprinting, and changing directions differentiates an able striker.

As the game evolves, the role of strikers shall change further. Strikers need to be creative, intelligent, speedy, and technically sound on a football pitch. The process to acquire these skills requires years of hard work and sacrifice. The earlier one starts and lets the process of myelination happen, the better their chances of becoming a lethal striker.

Read Edition #13 – The life of an Indian pro footballer

Read Edition #12 – In the lap of nature, and the footsteps of legends

Read Edition #11 – Slogging it out with Shlok

The life of an Indian pro footballer